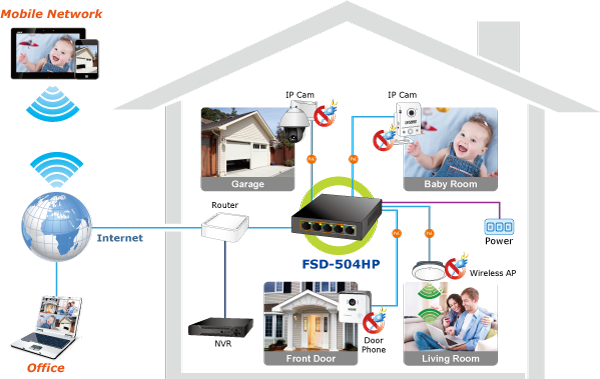 Perfectly-integrated Solution for PoE IP Camera and NVR System
The FSD-504HP provides four 802.3at/af PoE ports for catering to small-scale home and SOHO IP surveillance networks at a lower total cost. The FSD-504HP comes with a high-performance switch architecture and 60-watt PoE power budget. The recorded video files from the 4 PoE IP cameras can be powered by the FSD-504HP and saved in the 4-channel NVR system. Besides, surveillance software can be used to perform comprehensive security monitoring.

For instance, one FSD-504HP can be combined with one 4-channel NVR; that is, each of its PoE port can be linked to a specific 802.3af PoE IP camera for the administrators to centrally and efficiently manage the surveillance system in one site. The FSD-504HP’s Fast Ethernet TP interface also provides Fast Ethernet TP connection for uplink to NVR systems or public server groups. 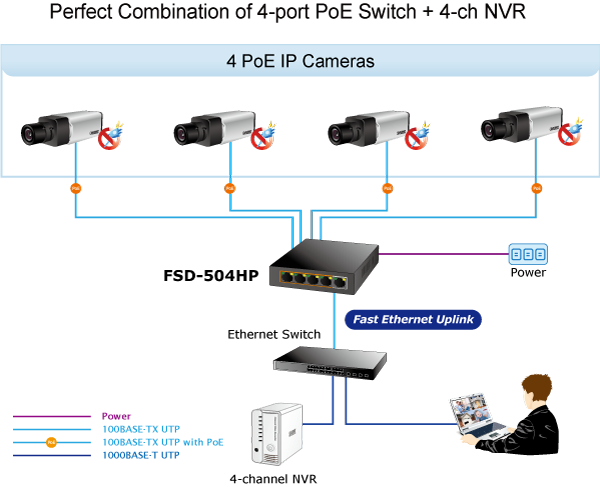 IP Office Department/Workgroup PoE Switch
With the business office expansion, the additional telephones required can be installed in less cost via the implementation of PoE IP telephony system than that of the traditional circuit wiring telephony system. The FSD-504HP 802.3at/af PoE Switch helps enterprises to create an integrated data, voice, and powered network. The IEEE 802.3af compliant IP phones can be installed without an additional power cable because the power can be provided via the standard Ethernet cable from the connected FSD-504HP.